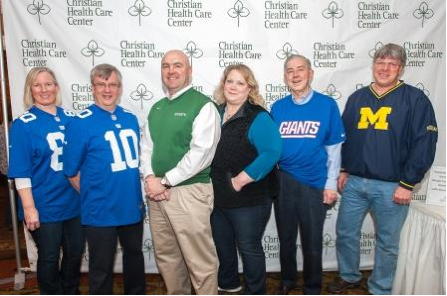 WYCKOFF, NJ … Christian Health (CHCC) in Wyckoff recently held its Fourth Annual Beefsteak at The Brownstone in Paterson. Approximately 250 people, including CHCC supporters, friends, vendors, board members, and staff, gathered to enjoy food and fellowship, helping to raise nearly $38,000. Proceeds from the fundraising event will support the Center’s 2016 Annual Fund, which will be used to refurbish and renovate The Longview Assisted Living Residence. The football-themed evening featured special guest speaker Drew Gibbs of Wyckoff, Head Football Coach for Ramapo High School who most recently led the team to a 45-15 North 1, Group 3 state championship. His message about “Football, Teamwork, and Family” and its correlation to CHCC’s mission were very inspirational.

“Whether on or off the field, Coach Gibbs reminded us about how important great teamwork is to the success of any endeavor,” said Douglas A. Struyk, CPA, LNHA, CHCC President and CEO. “His passion for excellence in his players, particularly their ability to develop as leaders, was inspiring to hear and apply to our roles here at CHCC, in our families, and in our community.”

4-One; and Ret. Lt. Col. Nathan Sassaman, West Point graduate and former star quarterback who carried Army to its first bowl victory and was a courageous warrior who earned a Bronze Star for valor.

To view more photos of the event, visit https://christianhealthcare.org/beefsteak/beefsteak-2016-photo-gallery/